The client, a Private Equity firm wanted the TresVista team to conduct an operational cost analysis between whole ownership and fractional ownership of an aircraft. The team was required to prepare a model to analyze the cost variables and use the model to return the break-even point for the most cost-effective asset utilization. Further, the variable, fixed and ancillary operating costs to be incurred as per contracts of both long–term assets needed to be identified. Additionally, the differential pricing to calculate variable operating costs at different usage levels for the Fractional Ownership Agreement needed to be identified as well. Lastly, the team was required to locate Inflection Point on the usage hours of both assets.

To conduct a break-even cost analysis between two private jet contracts for ascertaining the cost efficiency between purchasing and leasing an aircraft.

The major hurdle faced by the TresVista team were:

The TresVista team overcame this hurdle by calculating and then deducting the net revenue projections arising from the Contract 1 model for comparable analysis to achieve parity between Contract 1 and 2. 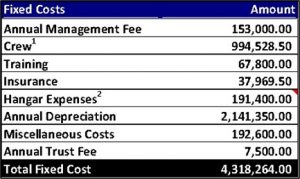 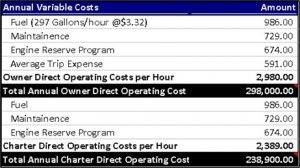 The TresVista team created the model which incorporated estimated data for future years as well. Hence, the model could be used by the client to assess the costs for the upcoming years. Further, a console was created using data validation tools that extracted data from all input points to make it easier for the client to add/edit data at their end as well.